31/08/2017. We are writing at the end of August. Pascal has now been underway for six whole weeks. The time is flying by. Now that he has also completed the middle phase of the Danube's course, it's on into the last third: the lower Danube. It is characterised above all by extreme weather conditions. In summer the temperature usually blisters at around 35 degrees, and in winter falls at times to -25 degrees, so that the Danube freezes and shipping is halted. For Pascal there is a high chance of a heat wave. The infrastructure (roads, railway, harbours, etc.) has clearly stayed behind western European standards. The Danube widens, up to four kilometres, and, in particular, slows, as there are hardly any more slopes and lots of space for meandering. Large oxbow lakes, swampland, sandbanks, marshes, reed forests and fields bedeck the river's course.

For protection from flood water many villages are found a few kilometres inland, and most have stalled in their development. Dirt tracks, donkey carts, simple houses, free-roaming hens and geese, gardens with their own fruit and vegetable beds, and older women washing their clothes in the Danube mark the villagescape. What does this mean for Pascal on the last 900 kilometres to the Black Sea? Paddling until exhaustion, good regeneration time and water supply, a difficult search for accommodation, and also leading a more modest and simpler life. And perhaps this is what it's all about in the end.

"Only looking at the target ruins the joy of travel." The P&T maxim of the week from Friedrich Rückert is perfect for the time to come, but also for today. For Pascal hasn't pre-arranged any accommodation, because he simply couldn't find any. And so he simply let himself drift along, save in the knowledge of his new tent, sleeping mat and sleeping bag, for as long as his arms, legs, shoulders and the SUP would carry him. He started this stage at around 09:00 in the morning. There wasn't anything truly spectacular to see on the riverbanks today. Pascal paddled along with ease, a barge passing him from time to time.

After Drobeta Turnu Severin, the next village is Simian, where the buildings of the former Ada Kaleh Island, submerged in the floods, were once to be rebuilt. But none of that happened, and its former inhabitants returned to Turkey.

A little later the Danube officially turns out of the mountain range via two long bends, surrounding the Ključ Peninsula. It is here that Pascal starts out on the lower Danube. To the east are the 500 kilometre-long and 150 kilometre-wide plains of Walachia, which Pascal will soon paddle through. For the Danube soon runs over long bends in a southerly direction. The Walachian plains are surrounded to the north by the Transylvanian Carpathian Mountains, ranging up to 2,500 metres in height, and to the south by the Balkan mountains, bringing it up to 2,300 metres and forming a natural barrier between the Mediterranean and the Black Sea. In the west, as before, he can still see the Serbian Ore Mountains, but only for another 150 kilometres or so, at which point the Danube only flows in an easterly direction.

He took his first break at around 24 kilometres in the little village of Tismana. Pascal though of the moment in the book The Sound of Silence: A Book for the Brave by Sergio Bambaren. He read the book for the first time this year. He found it wonderful that you immediately experienced nature. A boy grows up in a purely natural setting, surrounded by water and, above all, by peace. Later curiosity brings him to the city. He senses the hectic atmosphere, sees the people rushing through life. And tries to help them, encouraging them. Precisely this peace found in nature, the subject of the book, is what Pascal was able to sense for the entire day. But also to have the courage to simply let go and not know where you might end up in the evening.

At around 16:00 Pascal had had enough of paddling. Pascal landed on the Romanian side, opposite the little village of Zike, at river kilometre 890. Here he found a peaceful and idyllic little place on the riverbank and erected his tent. The rubbish to the left and right ruined the atmosphere a little. But Pascal isn't going to let himself be brought down and would now like to relax during the evening and enjoy the peace of nature. "Here you can really unwind, for the first time it really feels like a holiday." he said to me on the phone. With sufficient food and five litres of water, he is also properly prepared for the night. As it was a sunny day, there will surely be a beautiful sunset over the Danube. It would be the perfect end to a relaxed day. And so it's time to bid Pascal goodnight on his first evening in the open wilderness.

But what is the actual situation on the lower Danube from an ecological point of view? Let's put it like this: not great. It began in Communist times. Both Ceaușescu in Romania and Zhivkov in Bulgaria pushed the development of heavy industry into full swing. The once poor farming states were supposed to become exemplary industrial nations. Environmental protection or sensible planning? Nobody was interested. In the industrial towns on the Danube, like Ruse or Galati, but also inland, such as in Bucharest or Ploiești, massive industrial works were stamped out of the ground. Wastewaters were and today continue to directed into the waterways unfiltered. Nuclear reactors were placed right on the Danube. Was the extracted cooling water tested for radioactivity in accordance with western European standards? Probably not. What effect did all of this have on the river? Let's wait to see what Pascal reports back to us. But it doesn't bode well.

Tomorrow too Pascal will let himself go with flow. Let's see where it leads him. TF

PS: At his point, another little note: as Pascal will more and more often be setting up his tent over the coming stages, it could well be the case that he will run out of battery from time to time. But perhaps this is the best thing that could happen to him, so he can really experience true peace of mind. At any rate, there will then also be no blog from time to time. Not that that should bother you. 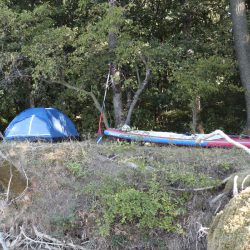 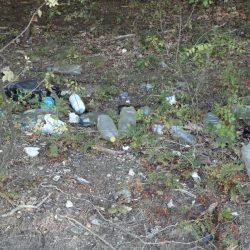 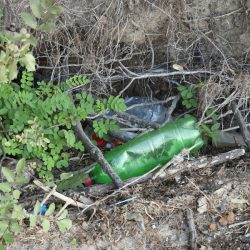