25-26/08/2017. "One of these whirlpools is enormous. In its midst the water circles vigorously, as if waltzing. […] The closer you get to it, the clearer you hear an unsettling sound. It's as if someone were speaking, knocking, and rolling around, all at the same time, somewhere deep under the water." That's how the Serbo-Austrian writer Milo Dor describes his impressions of the Iron Gate. The Turks also described it as a "giant cooking point". It is the most dramatic section along the entire course of the Danube. Ships crashed into underground cliffs by the dozen, small boats were pulled under by giant vortices, many people drowned in the torrents and were surrendered as sacrifice to the river god. Nobody dared enter the passageway without experienced guides. And even then it often ended in tragedy. Today Pascal completed his first kilometres of the 130-kilometre stretch. But more on that soon.

First of all, on Thursday evening it was into the Romanian hinterland with Tibi, Marius and the film crew with Nils and Matse. It was an adventurous journey over gravel paths, that took 2.5 hours. After the boys had a proper lie-in for once, and after another 1.5-hour journey, mid-morning on Friday it was onwards to the Nera Valley's entrance. For Pascal it was a terrific change, after the many days on the broad Danube, to paddle on a small, narrow river, to bathe in waterfalls, and simply enjoy the idyllic countryside – relaxation for the eyes, as Pascal told me, even if even here, in this place, the odd piece of rubbish was still visible. The boys paddled a total of around seven kilometres along the Nera, surrounded by beautiful karstic gorges. Unfortunately these only held a little water, so now and again the SUPs had to be carried. It was particularly challenging for Nils and Matse who wandered along the seven kilometres of the river, and, at the same time, obviously had to carry their film equipment. Pascal had a terrific day, and his thanks go to Tibi and Marius who had organised everything perfectly.

This morning there were another 2.5 hours back to the Danube, and Pascal re-emerged at the place where he had left the Danube on Thursday. At about 11:20 he set out on the way to Berzasca, the day's goal. It was a hard stage for Pascal. There was a lot of counter-wind, meaning that he needed around two hours for the first eight kilometres. Over the entire stage today Pascal used an average of 303 paddle strokes per kilometre. That's 80 paddle strokes more in comparison with the previous average. Up to now, it is the third-highest value across all the stages.

After Moldova Veche the valley widened, and the Danube expands across a width of almost ten kilometres. It is like a large lake. In the middle of this section cliffs just out, the water washing round them. Pascal always stayed on the left bank of the Danube, a tip that he got from the locals. If he had paddled over the middle of the lake, the wind would have blown him all over the whole lake.

Shortly thereafter he arrived in Golubac. Its fortress lies directly on the Serbian riverbank, and is a spectacular view from the water. Alongside Belgrade, it was one of the most important fortresses and constantly changed hands. It was first mentioned in 1335 in a Hungarian deed, and was called the "Lock of the Iron Gate". Earlier it jutted out on a cliff, but due to damming today the water sometimes washes right into the inner courtyard. Opposite the fortress, on the Romanian side, Pascal had his first break – an important recovery time with his arms and shoulders burning from the first eight kilometres.

After that the Danube is again closed in, and the wind also lifts a little here. What is actually happening with the Danube? Why is the Iron Gate such a dramatic passageway? Up to this point the Danube ran over lowlands and smaller mountain ranges, which it either flowed around or through. Now the Carpathian Mountains lie before it, which continue as the Ore Mountains on the Serbian side. What can the river do? To flow around them would make for a long journey, particularly as the Carpathian Mountains are shaped like a reverse C in front of the river. The Danube takes the short option. It channels through the great mass, and so deeply that at places the river is flowing at 80 metres below sea level. The Danube narrows in some sections to just 120 metres, after having been several kilometres wide in some parts. Paddling through the gorges is spectacular, by this also used to be dangerous, as you might expect. Cliffs in the water, rock falls, underwater whirlpools and vortices made the Iron Gate a life-threatening passageway.

Pascal found it terrific to be surrounded by mountainous landscapes again after many days on the plains. The compressed Danube reminded him of the Wachau. After a tough 31 kilometres he reached his day's goal at around 16:30. Pascal treated himself to some terrific accommodation in Berzasca. It is a lake house built on stilts, floating right above the Danube. From the terrace, cool beer in hand, he enjoyed the view of the Danube, the Carpathian Mountains and the Serbian Ore Mountains. Later there was another short interview with Nils and Matse, and then it was time for some good sleep, as there will also not really be any current tomorrow.

During the 19th century the Iron Gate was further calmed via detonations. In the 60s and 80s two large dams were erected at the end of the passageway, raising the water level to 30 metres. Whole villages, which once lay on the riverbanks, were flooded by the Danube as a result. Since then it has been possible to pass along the Danube at the Iron Gate without any problems, so there is no more danger for Pascal. Over these days he can completely focus on the beautiful and unique river landscape.

Tomorrow the journey continues through the Iron Gate, with some exciting sights lying along the stretch. TF 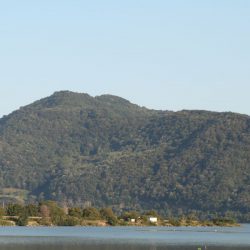 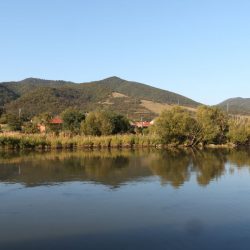 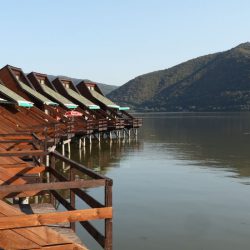 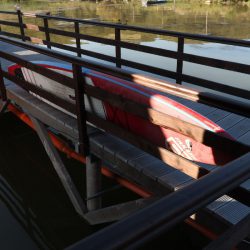 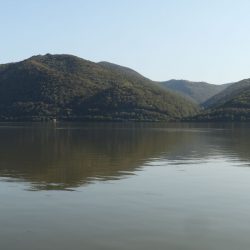 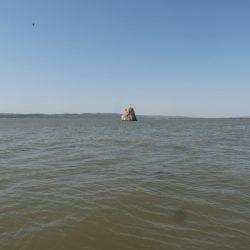 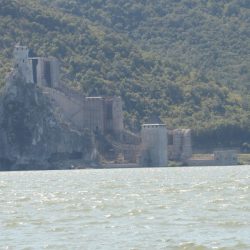 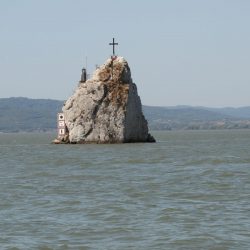 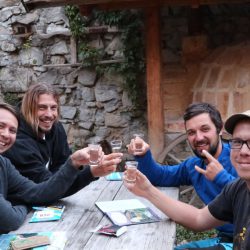 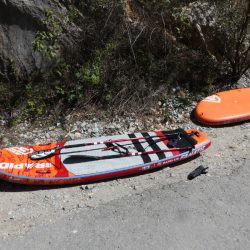 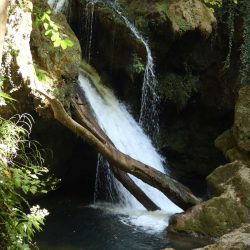 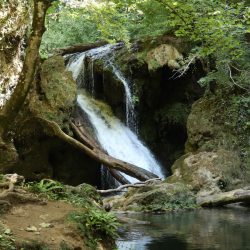 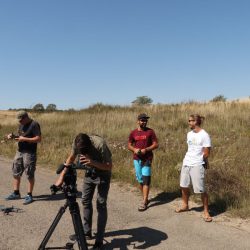 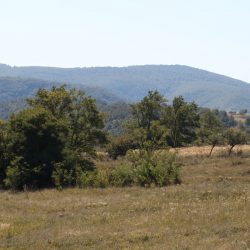 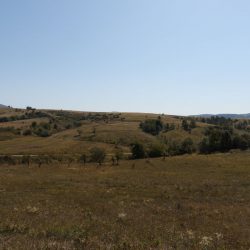 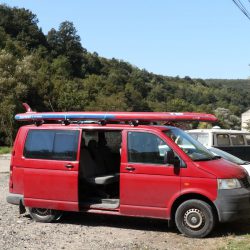 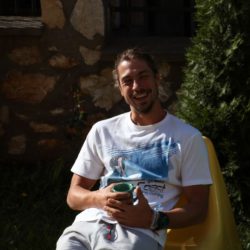 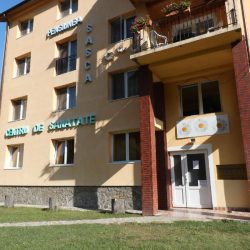 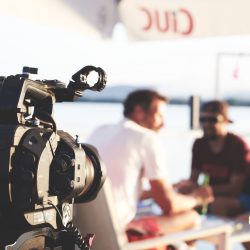 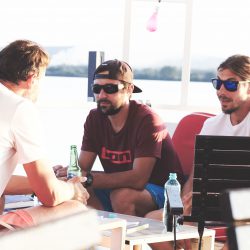 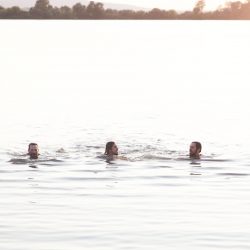 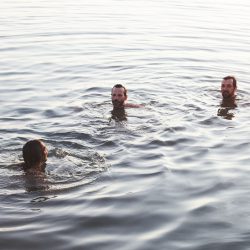 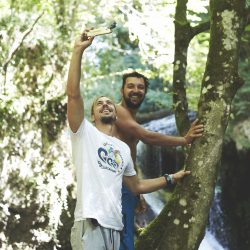 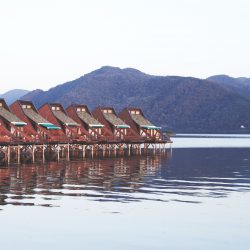 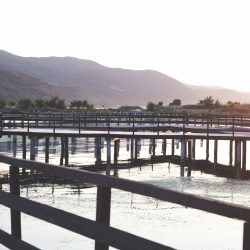 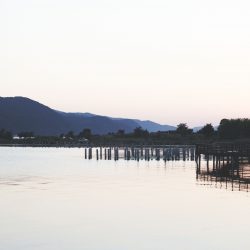