02/09/2017. Pascal heard of him through an ARTE documentary that Pascal watched a few months ago. He is a famous Romanian poet and writer who apparently built a cultural centre and guesthouse on the Danube in Cetate, and lives there today. He was one of Romanian literature's great hopes, but because of his poems and writings criticising society he fell into disrepute, and ended up on the radar of the Securitate, the Romanian secret service. A provocateur, an enfant terrible for those in power. The inevitable happened. Ban on publication in 1987. He had to give up his job as an editor. Finally he was even put under house arrest. A man with an eventful life behind him. His name: Mircea Dinescu. His meeting place in Cetate was Pascal's goal for the day.

Pascal spent the second night in the open wilderness in a similar manner to yesterday's. Once more there was a lot of noise, and he couldn't really get to sleep. In Romania and Serbia, due to various church feast days, there's a rather narrow timeframe for weddings in the summer. And apparently it is currently "prime time" for swearing lifelong fidelity. As a result in many villages in the area there is an enormous amount of drinking and dancing, a disadvantage in this case as far as Pascal's import recovery sleep was concerned. However he was already considerably more relaxed and stopped listening to each and every noise. In the morning he got up around 08:00 and enjoyed a refreshing bath in the Danube, made himself a small breakfast and, a little later, packed his things together. He started his stretch towards Cetate at around 09:45.

After the small town of Gruia, first there was a long curve bringing the Danube back into a south-easterly direction. Here Pascal was able to watch a massive flock of cormorants while they bathed in the sun on a sandbank. When Pascal drew closer they flew off, with a good deal of noise. Pascal was impressed by the sight of the around 150 cormorants rising up into the air, even if these animals don't exactly make the nicest of sounds, as he told me on the phone.

At kilometre 846 the small Timok River flows into the Danube. It is about 200 kilometres long and further along its course coal and ore mining is carried out, seriously damaging the water quality. The Timok is also the natural border between Serbia and Bulgaria. And at this point, after paddling 588 kilometres, Pascal left Serbia. Zdravo!

It's now "Sdrawej Bulgaria" for Pascal. After around 1620 kilometres and 45 days he reached the eighth country of his journey. For the next 400 kilometres the Danube forms the natural border between Romania and Bulgaria. The Bulgarian Danube flows through the northernmost region of the poorest country in the EU. On this section there are only two bridges between the two countries, one of which was only completed in 2012 in Vidin, and the Bridge of Friendship in Ruse. The Danube has no great meaning for Bulgaria, with the north of the country only being sparsely populated. Vidin and Ruse are also the only two larger cities that lie directly on the river.

After the border crossing, which Pascal was able to carry out without problem, and a slight bend, it was then just straight ahead along the Danube for Pascal for 20 kilometres. On the small sandbank of Chichinete Pascal stopped for a short break and relaxed a little in the idyllic natural surroundings.

Then there were another 15 kilometres for Pascal to paddle. The last five kilometres were particular taxing for him, with the Danube at times only being three kilometres wide here and with temperatures soaring again today. At least the river offered him a little current, Pascal estimating it at around four kilometres per hour. And so he was able to save a little energy.

Pascal then landed, around 15:30, at Port Cultural Cetate, at river kilometre 812. Once it was a small port facility where Cetate grain was loaded onto ships for export. The grain was even used to bake croissants in Vienna. After the Second World War the buildings were used for border control, and the famous Cetate grain was exported over land towards Moscow. After the collapse of the Eastern Bloc, the main building visibly deteriorated and was used by local farmers as stalls for cows and pigs.

In 1997 the journalist, power and writer Mircea Dinescu purchased the land and turned it into a meeting place for artists, musicians, writers, film-makers and culture fiends. Among other things, he had a small park full of angle sculptures built on the Danube as a contrast to Transylvania's "satanic" Dracula myth. The meeting place also contributes to the encouragement of exchanges between the neighbouring states, Romania, Bulgaria and Serbia, through joint projects. A wonderful story, as these states observe each other rather uneasily, as opposed to living together as open and friendly neighbours. Furthermore, the meeting place offers fantastic food with local produce and traditional regional cooking.

Pascal was able to spontaneously book a room in Port Cultural Cetate. In the late afternoon he first indulged in a glass of white wine from the innkeeper's estate. Here, sitting by the Danube, he was really able to switch off, especially as he is only surrounded by Romanian speakers and so can't be distracted by their conversations. Above all, he enjoyed "finally getting to properly sit down again after two days in the wilderness", as he told me on the phone. His summary of the day: once again the Danube had inspired him. To see how the water manages, through its own power, to regenerate from all of the damaging materials that people feed into the river, is impressive. Across the many sandbanks and the corresponding flat places, today he was able to see portions of crystal-clear water, which reminded him of the Isar, and certainly made him a little homesick. Personally, the combination of pure nature, physical activity, and spiritual peace, letting his thoughts flow freely, is doing him good.

Tomorrow Pascal is again planning a stage of around 40 kilometres. And once again the target is as yet unknown. TF 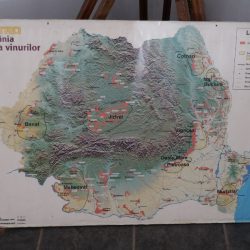 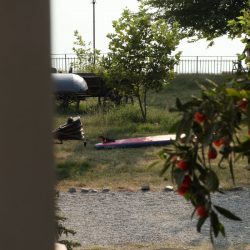 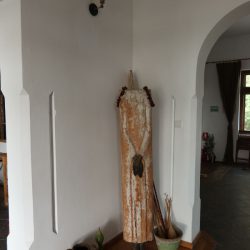 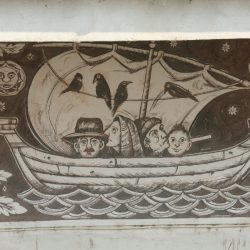 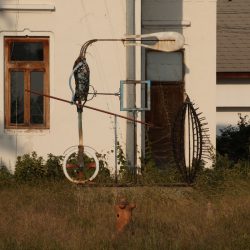 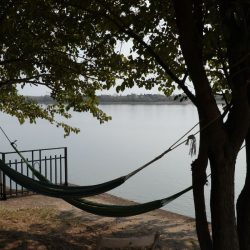 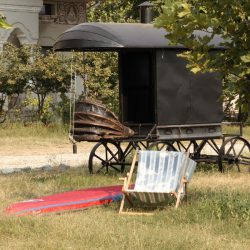 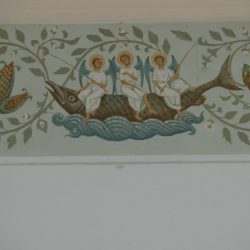 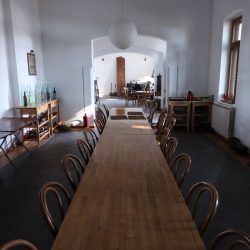 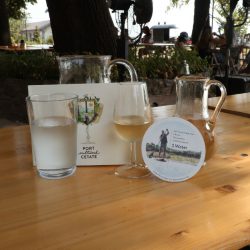 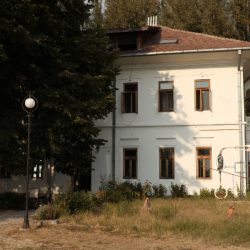 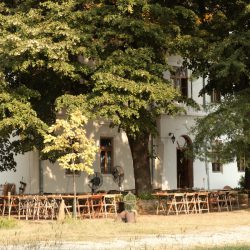 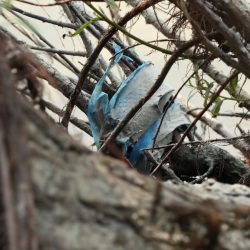 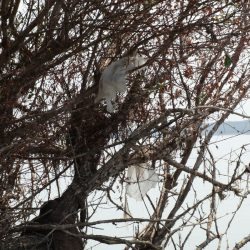 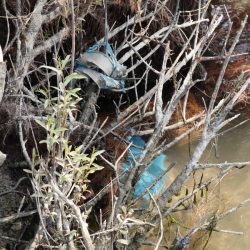 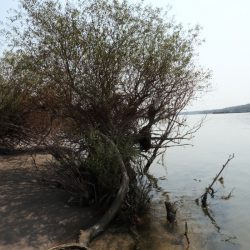 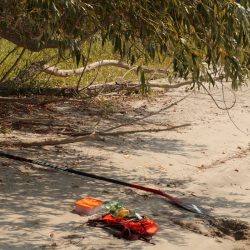 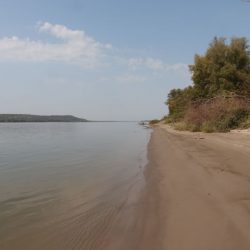 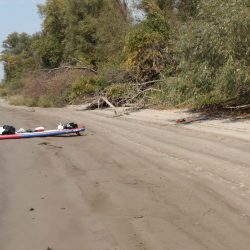 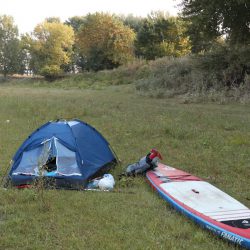 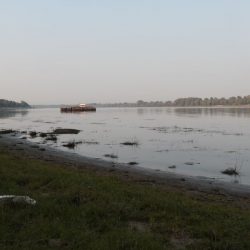 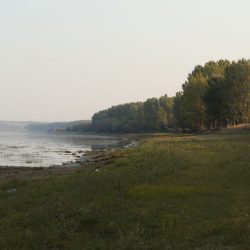 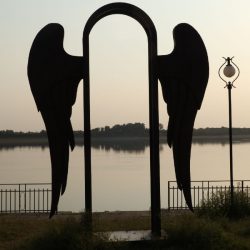 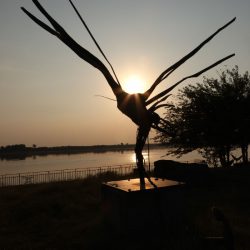 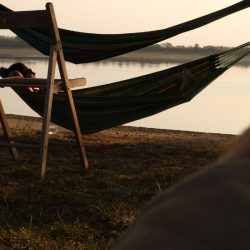 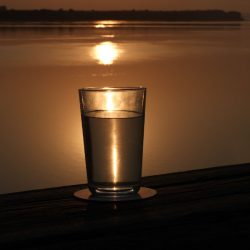